History of the Mendocino Guitar Workshop 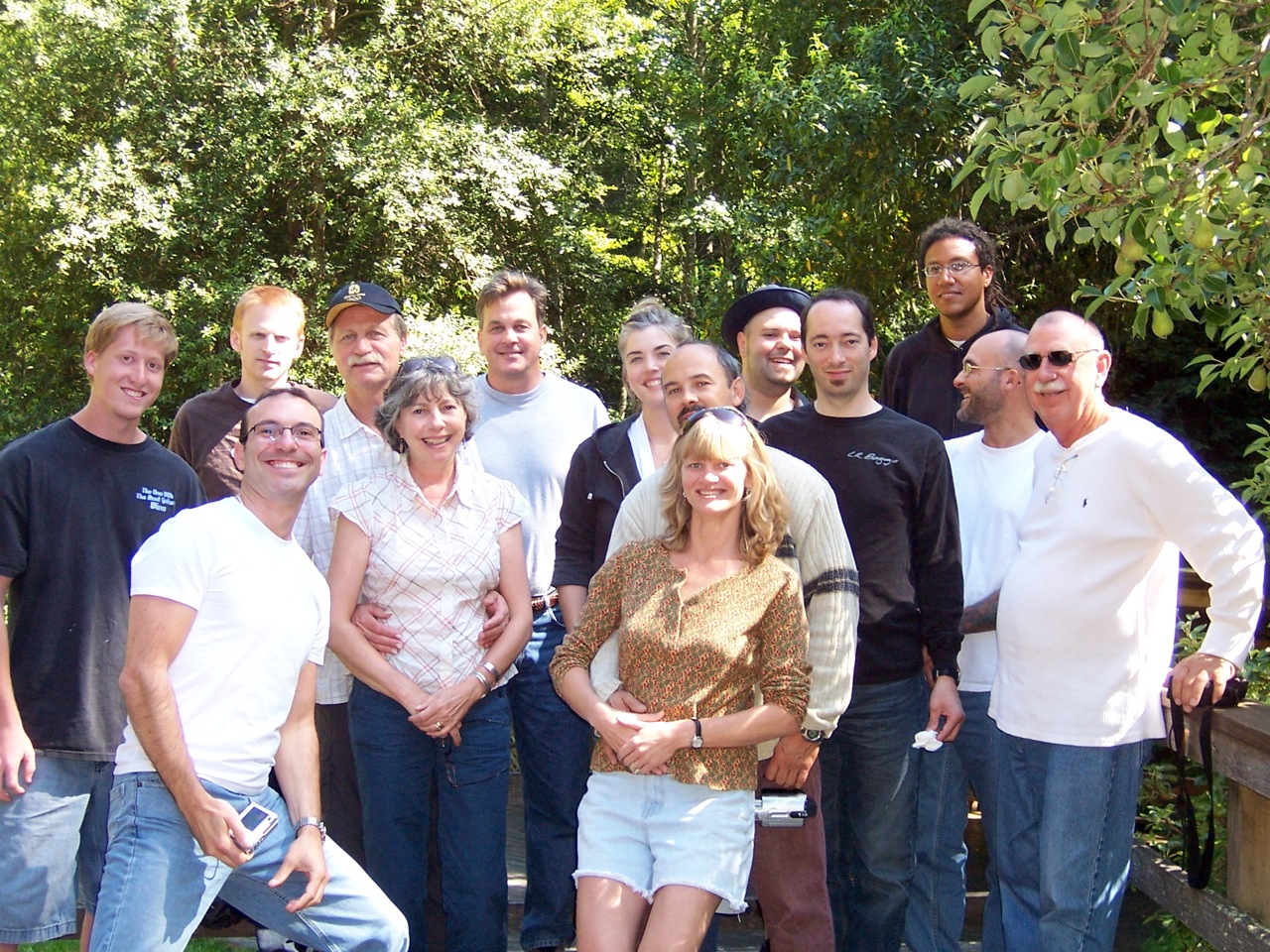 2019 marks the 20th anniversary of the workshop’s humble beginnings as a pair of weekend get-togethers with a handful of guitarists—one at our home and the other at Laurel Mill Lodge, deep in the Santa Cruz Mountains. My wife, Alison, volunteered to cook and has continued to delight workshop participants with her delicious and healthy meals ever since. Realizing the limitations and “close quarters” of holding a workshop at our home, for the next 13 years we conducted all the Summer Intensive Guitar Workshops at Laurel Mill Lodge where participants could choose between paying extra for a cabin on the creek, a cheaper option of throwing down a sleeping bag in the A-frame bunkhouses, or free camping in the meadow next to Soquel Creek—or even just crashing on the couch!

Laurel Mill Lodge was a great place for a guitar workshop, but eventually we felt the need to move operations closer to our home in Mendocino County, so we pulled up stakes and moved operations to Jug Handle Creek Farmhouse on the Mendocino Coast in 2013. The 19th century farmhouse had its charms—it is part of the beautiful Jug Handle State Park and beach—but it was a little cramped, so we moved, once again, to our current location at the Albion Field Station facility on the mouth of the Albion River.

It was this last move that allowed us to expand in size from 12 to 18 students, and for the first time, add a second teacher in the form of Grammy® award winning classical guitarist and composer Andrew York. Though we had been aware of each other’s work for many years, Andy and I met for the first time at a guitar festival in Germany in 2011, and shortly after that, we started performing in concert together. Having each played the other’s primary instrument—Andy has played steel-string, and I’ve played classical guitar—and being very eclectic in our influences, it seemed like a natural to bring the sounds and traditions of both genres together in concert and also to teach them together under one roof.

We have always been an all-ages workshop, and we have had participants as young as 12 and as old as 70. While we have considered offering separate workshops for different age groups and interests, we find the intergenerational mix provides a unique opportunity for participants to learn about a variety of musical traditions and guitar techniques from each other. Evening jam sessions often look like family gatherings where the songs of the 60s collide with the latest sounds off the internet. 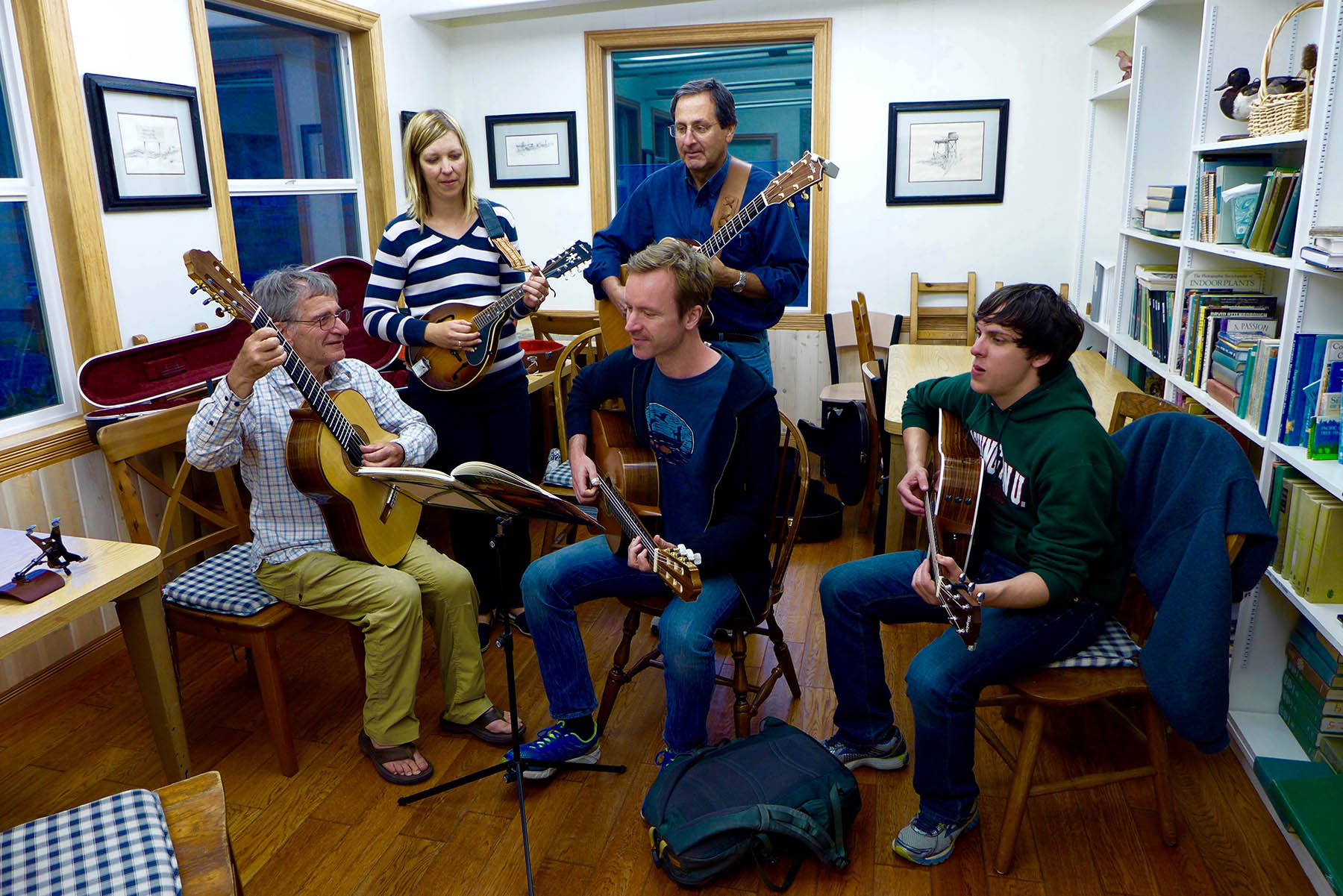 We have tried to make the workshop reasonably accessible to guitarists of different economic backgrounds, and we have been very fortunate to attract sponsors who make it possible for young students (under 25) to apply for full tuition scholarships. We currently offer six scholarships and we are looking to increase that number going forward.

Alex de Grassi grew up in the San Francisco Bay Area and graduated from the University of California, Berkeley with a B.A. in Economic Geography while also taking courses in Music and Art.  He has recorded 20 albums for Windham Hill, RCA, Earthbeat, and his own Tropo Records label, earning a Grammy nomination for his 1998 album The Water Garden. Alex has toured extensively in North America, Europe and Asia, appearing at festivals including the Montreux Jazz Festival in Switzerland, Telluride Jazz Festival and the Bath International Guitar Festival in the UK.

As an educator, Alex has led workshops and master classes at the Interlochen Institute, the Omega Institute, Crown of the Continent, National Guitar Workshop, Swananoa, and numerous guitar programs at universities and guitar festivals around the world. His guitar transcriptions have been published with Hal Leonard, Stropes Editions, Mel Bay, Tropo Music and numerous guitar magazines. The Alex de Grassi Fingerstyle Guitar Method, a reference book on the fundamentals of acoustic guitar technique published by String Letter Publishing in March 2012, is being used as a primary text for the first fingerstyle guitar degree program ever being offered at the University of Wisconsin in Milwaukee where Alex is a frequent artist-in-residence. He has recorded instructional videos for Homespun, Hal Leonard, Mel Bay, and On the Path. He has also penned introductions to both the popular coffee table art book/reference tome, Custom Guitars: A Complete Guide to Contemporary Custom Guitars, and to From These Woods: The Guitar Makers of Santa Cruz County. He currently resides in Mendocino County in Northern California.